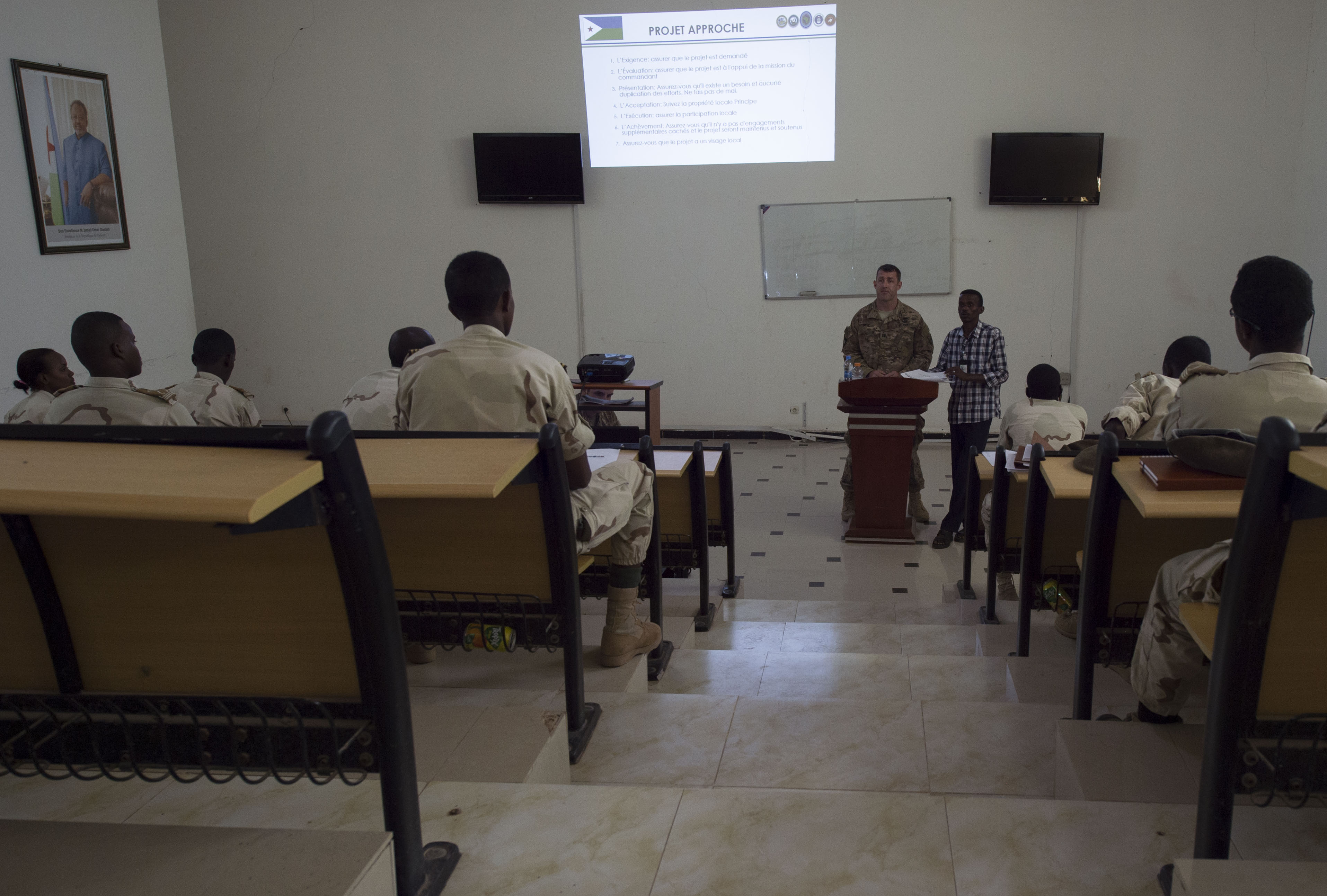 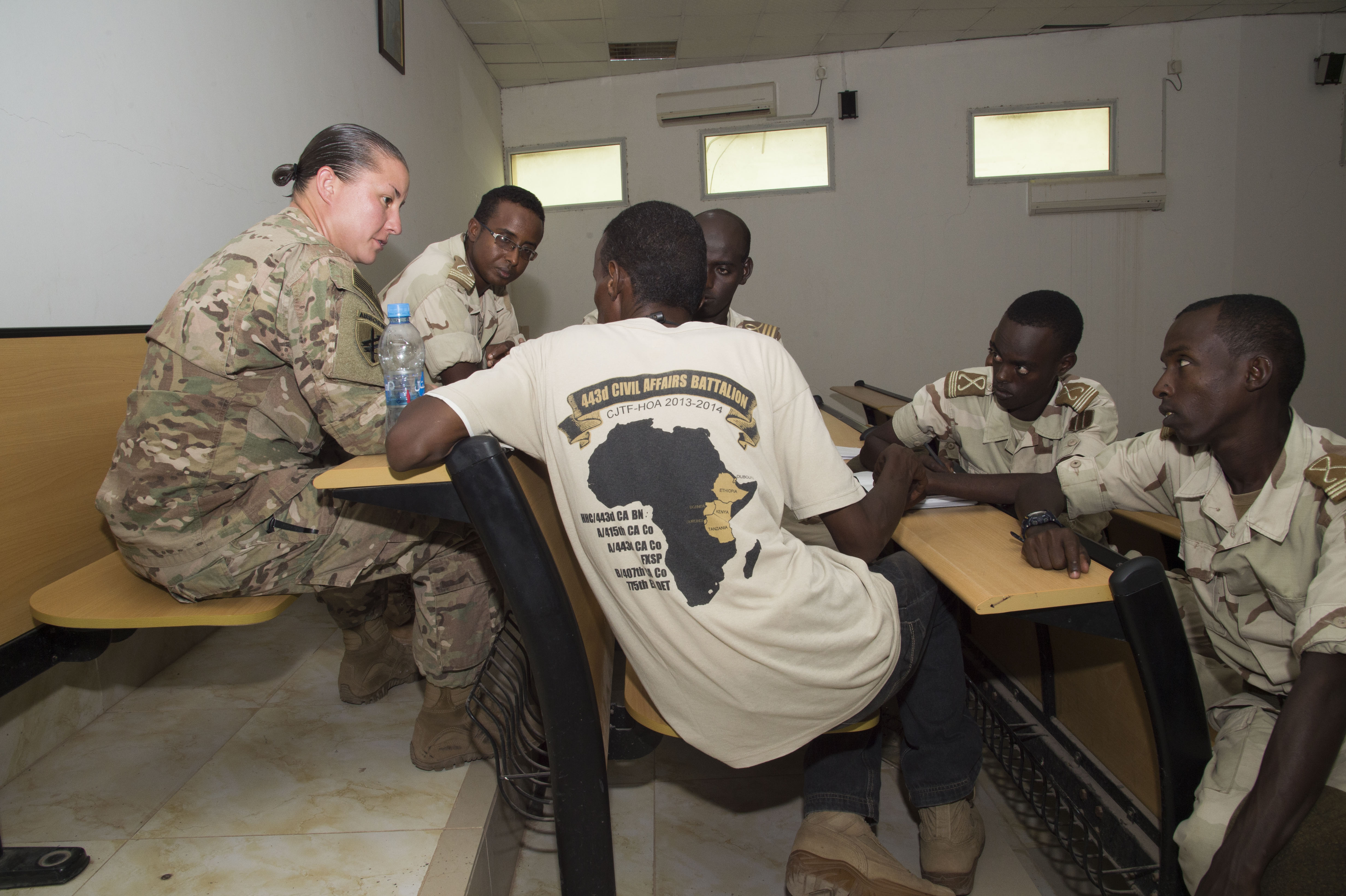 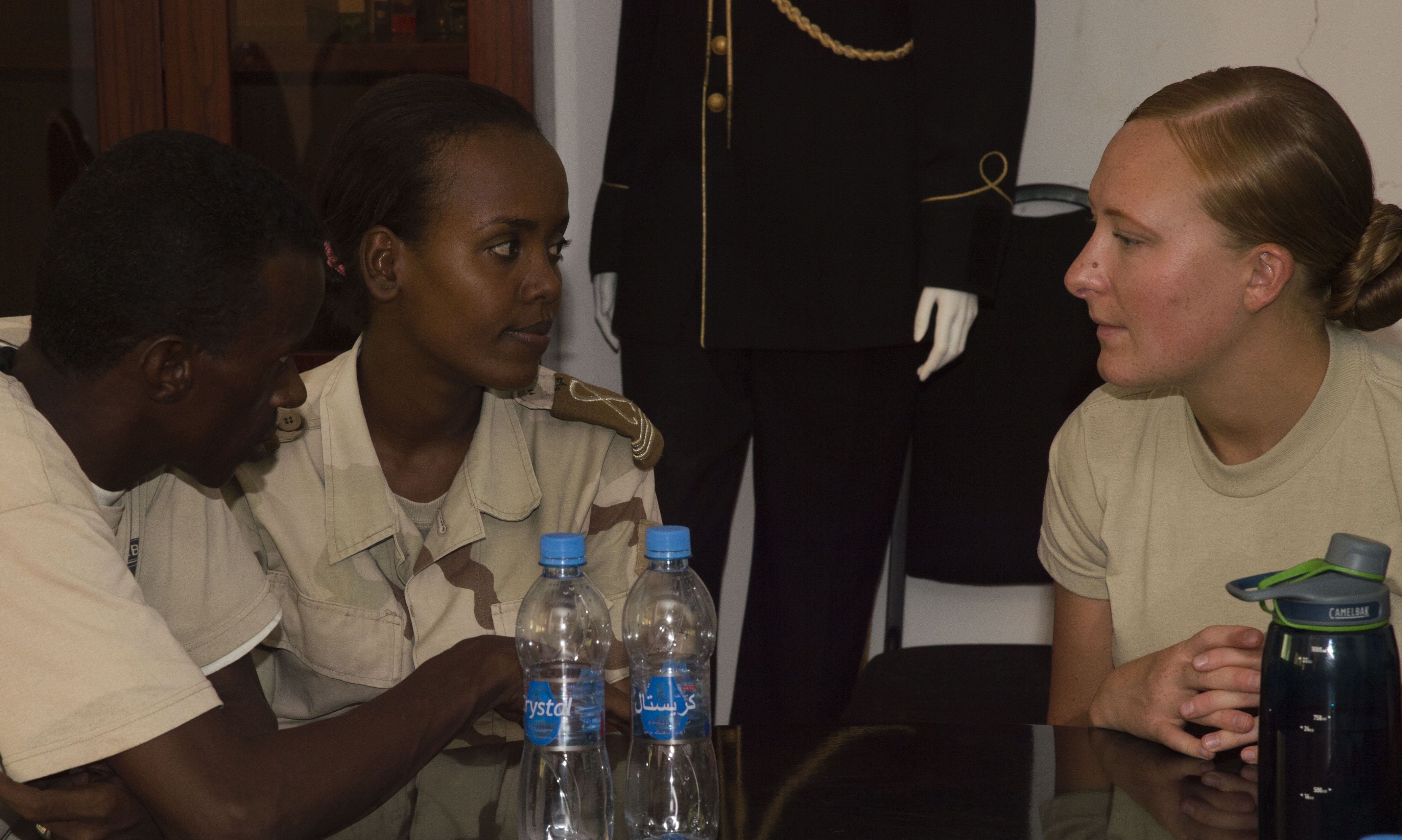 Combined Joint Task Force - Horn of Africa Image Cadet Ali, Djibouti’s Arta Interservices Military Academy third-year student, attempts to negotiate with U.S. Army Spc. Kristie Richardson, 403rd Civil Affairs and scenario role player, during Civil Military Cooperation training May 18, 2016, at Arta, Djibouti. The course was intended to teach the cadets communication and interaction skills with host nation civilians, and for them to pass the information to other soldiers after they graduate and are assigned to units. (U.S. Air Force photo by Staff Sgt. Eric Summers Jr.) 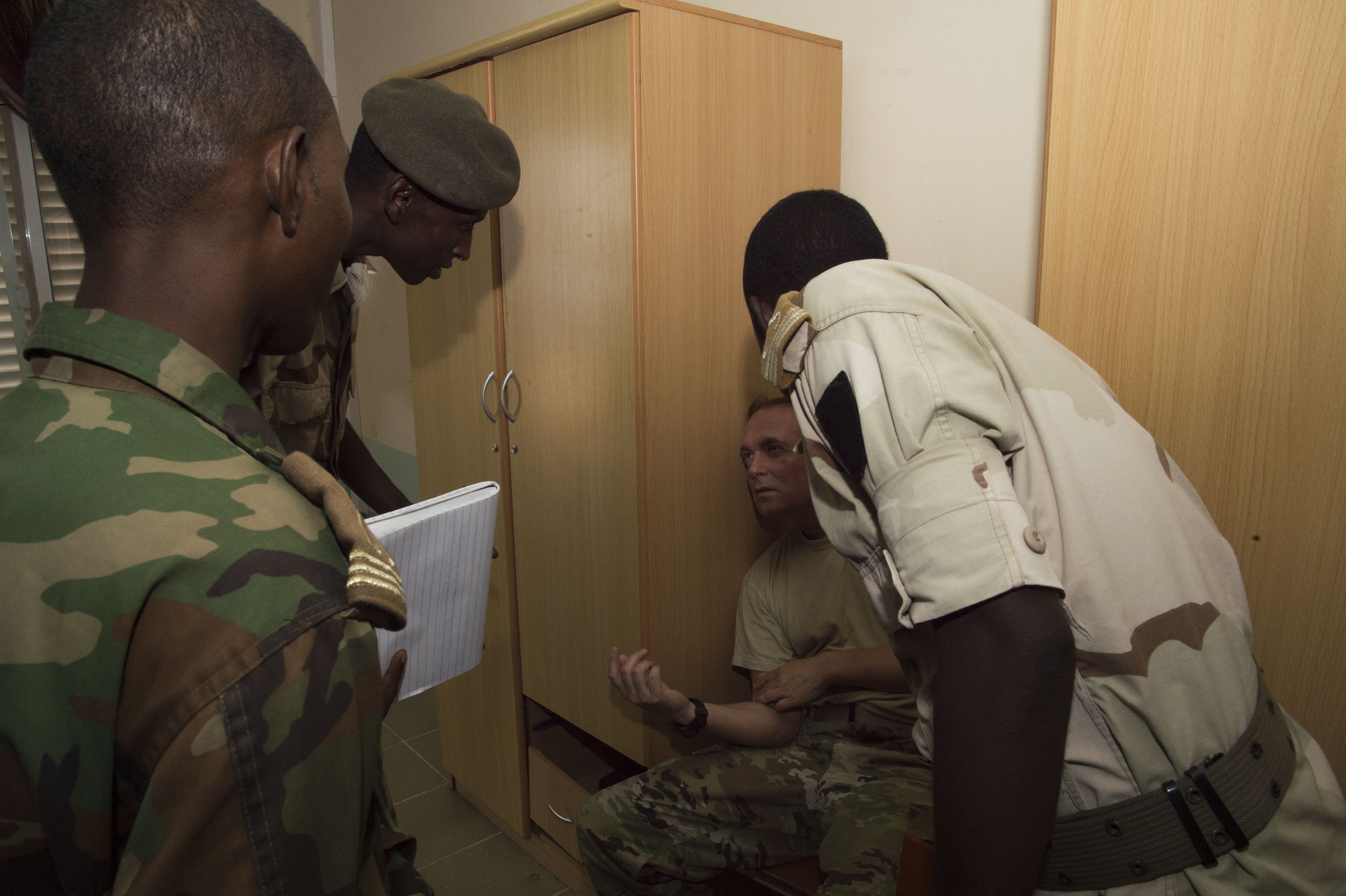 Combined Joint Task Force - Horn of Africa Image Djibouti’s Arta Interservices Military Academy cadets assess the needs and well-being of a U.S. service member role-playing as an injured aid worker in Somalia during Civil Military Cooperation training May 18, 2016, at Arta, Djibouti. The training concluded with a two-day exercise for the cadets to implement the skills they learned during the training. (U.S. Air Force photo by Staff Sgt. Eric Summers Jr.) 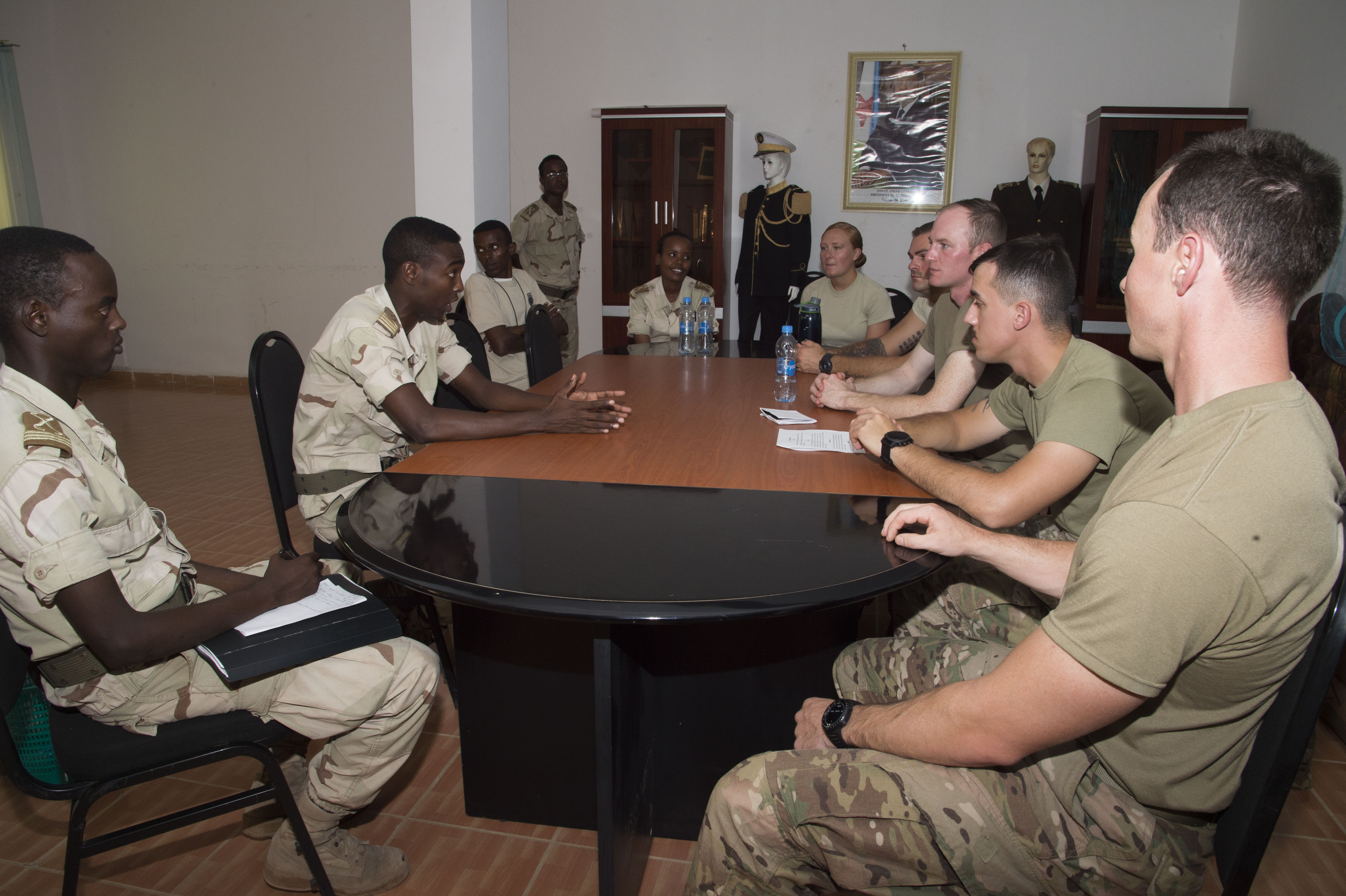 During conflicts there are always casualties, which are usually accompanied by destruction. While this is an expectation for those involved, there are usually noncombatants who inhabit the area and may suffer as well.

The Combined Joint Task Force-Horn of Africa 403rd Civil Affairs team recently taught a group of Djibouti’s Arta Interservices Military Academy (AMIA)cadets the importance of keeping those inhabitants in mind when facing conflict during a Civil Military Cooperation course May 5-19, 2016, at Arta, Djibouti.

The two-week course taught the third-year students a variety of civil engagement skills ranging from conducting meetings and key leader engagement to support of civil actors and proper ways to work with interpreters to better prepare them as future leaders.

“The training is important because we will have to engage the enemy in whatever area, and that area maybe populated by civilians,” said Cadet Abdourahim, AMIA second-year student. “This class was important [because it taught us to be] conscious that there are always civilians that are suffering during a confrontation between governments, and army and insurgents. So the CIMIC training was all about being conscious of the civilians and considering them.”

The cadets, who are scheduled to graduate in September and become lieutenants in the Djiboutian Army, will likely deploy to Somalia and these skills can be critical in the fight against Al-Shabab, according to Capt. Scott Wyly, 403rd Civil Affairs team leader.

The training concluded with role-play scenarios where the students had to interact with Americans acting as Somali villagers to demonstrate the skills they learned.

“We learned about how to engage with leaders, we also learned how to do a survey so we have to look at the area and people that live in it and consider what kind of people they are, what are their needs, what problems we may cause them so as to rectify, and do what we can to not impact their lives,” Adbourahim said.

He also said that it’s important for Djibouti to work with the U.S. because as an allied country they can benefit from their knowledge and know how, and apply it to their Army and standards.

“The U.S.  Forces have a lot of experience in many countries like Iraq and Afghanistan, so they know a lot about the warfare theatre,” Abdourahim continued. ”They were just sharing their knowledge that if you do not look at the civilians, if you do not consider them our mission will be much more difficult. “

While the Djiboutian cadets learned a lot from the Civil Affairs team, they were also able to share knowledge with them as well.

“This has been beneficial, not just for the Djiboutians, but my team as well,” Wyly said. “We have really learned a lot from these guys. This is the first time that we have ever worked the entire course with translators, and just learning about their country, their culture and their military has been a really rewarding experience for us all. “

Abdourahim agreed that both nations benefited a lot from the training and looks forward to putting the training to use. 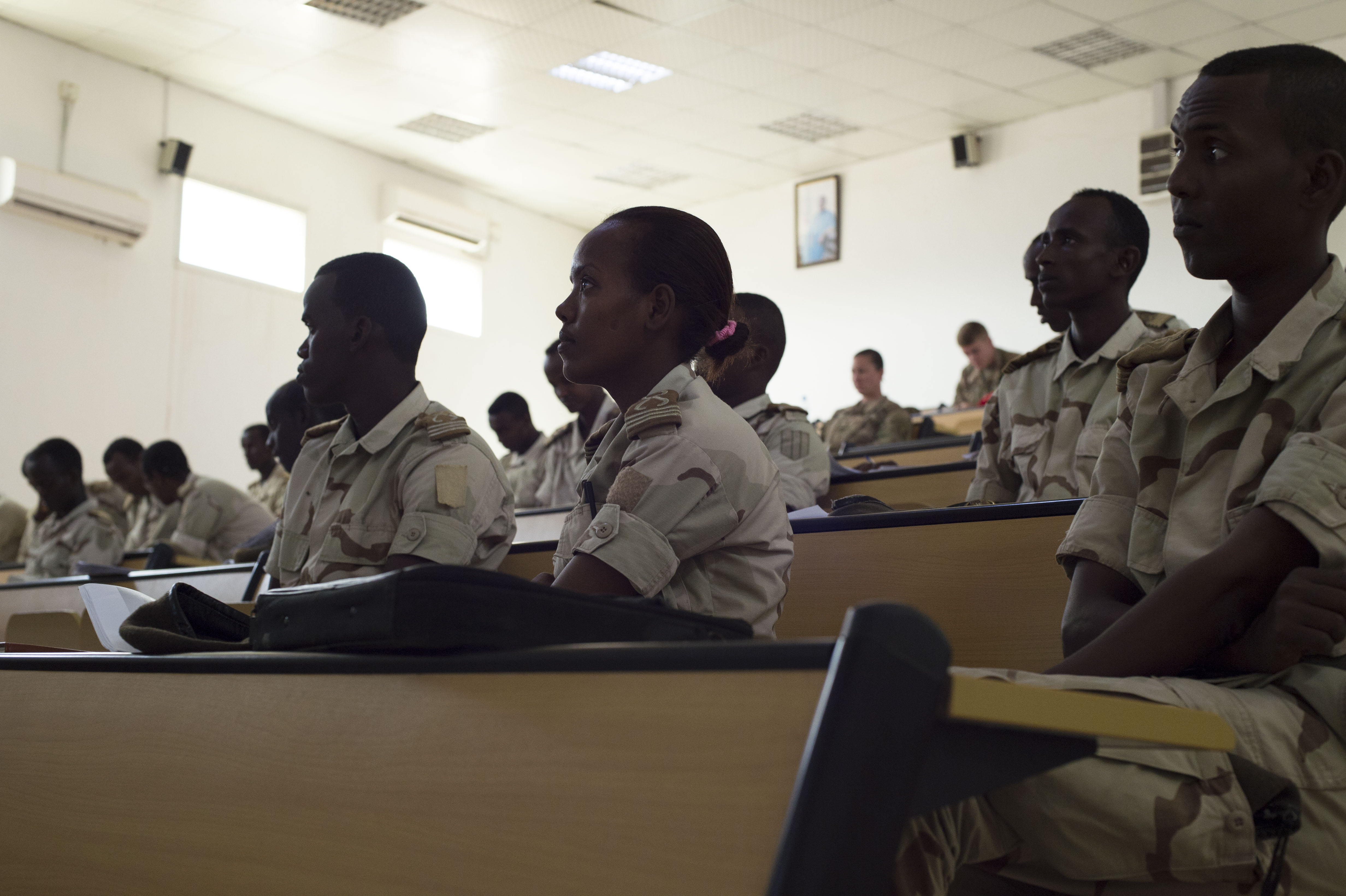 The Combined Joint Task Force-Horn of Africa 403rd Civil Affairs team recently taught a group of Djibouti’s Arta Interservices Military Academy (AMIA)cadets the importance of keeping those inhabitants in mind when facing conflict during a Civil Military Cooperation course May 5-19, 2016, at Arta, Djibouti.