While military members are often familiar with leaving their family behind for an extended amount of time, two brothers found themselves closer than they had been in 20 years during their recent deployment to Camp Lemonnier, Djibouti. U.S. Navy Capt. Christopher Greer, staff judge advocate for Combined Joint Task Force-Horn of Africa, and Chief Hospital Corpsman (HMC) Tim Greer, medical department head for Coastal Riverine Squadron 1-Forward, reunited halfway around the world for nearly eight months during their overlapping deployments. 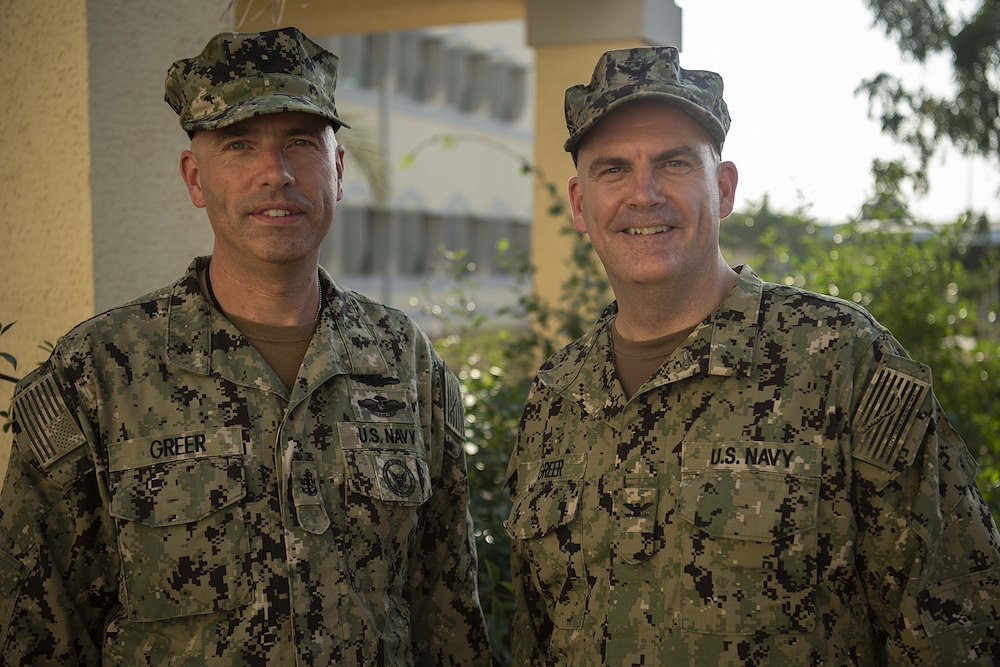 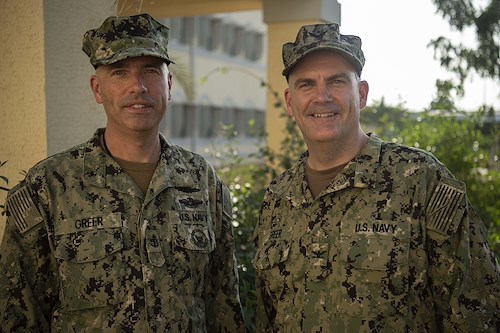 While military members are often familiar with leaving their family behind for an extended amount of time, two brothers found themselves closer than they had been in 20 years during their recent deployment to Camp Lemonnier, Djibouti.

“Aside from holidays and special occasions, we really don’t get the chance to see each other often because we live drastically different lives,” said HMC Greer.

Capt. Greer serves in the active component and deployed for one year, while HMC Greer, who deployed with his Reserve unit out of San Diego, spent nine months in East Africa. Interestingly, Capt. Greer actually has a tie to HMC Greer’s unit in San Diego, as he worked for the unit early in his career.

“Back when I was a young lieutenant, I was part of the same unit Tim is in; it was just named something different back then,” said Capt. Greer. “Out here I’ve been able to assist Tim when he’s had questions about some legal advice, and he’s been able to get my office out on the boats with him.”

Although the Greer brothers lead very separate and busy work lives, they took advantage of the time they could spend together when the opportunity presented itself.

“I’d say our interests are more similar now than when we were younger,” said Capt. Greer. “Regardless of how busy we get, we try at the very least to go to church together and eat lunch with each other every Sunday.”

While HMC Greer redeployed in mid-February, both brothers were glad they could see each other during their time at Camp Lemonnier.

“People need to utilize their resources while they’re deployed,” said HMC Greer. “The chances of us getting deployed together were fairly low. While I’m sure we would have made it through the deployment regardless, it was nice to have each other to meet up with.”