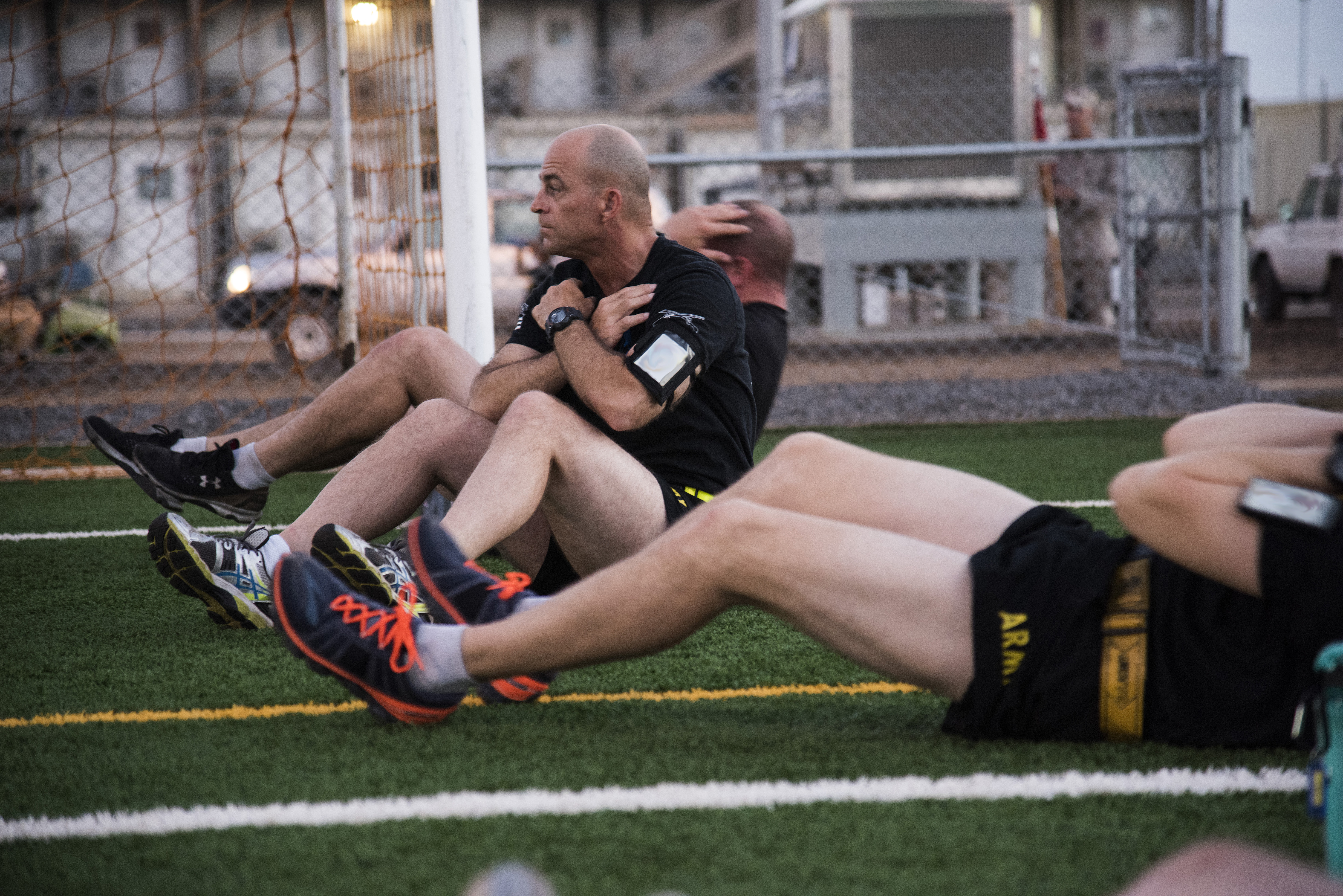 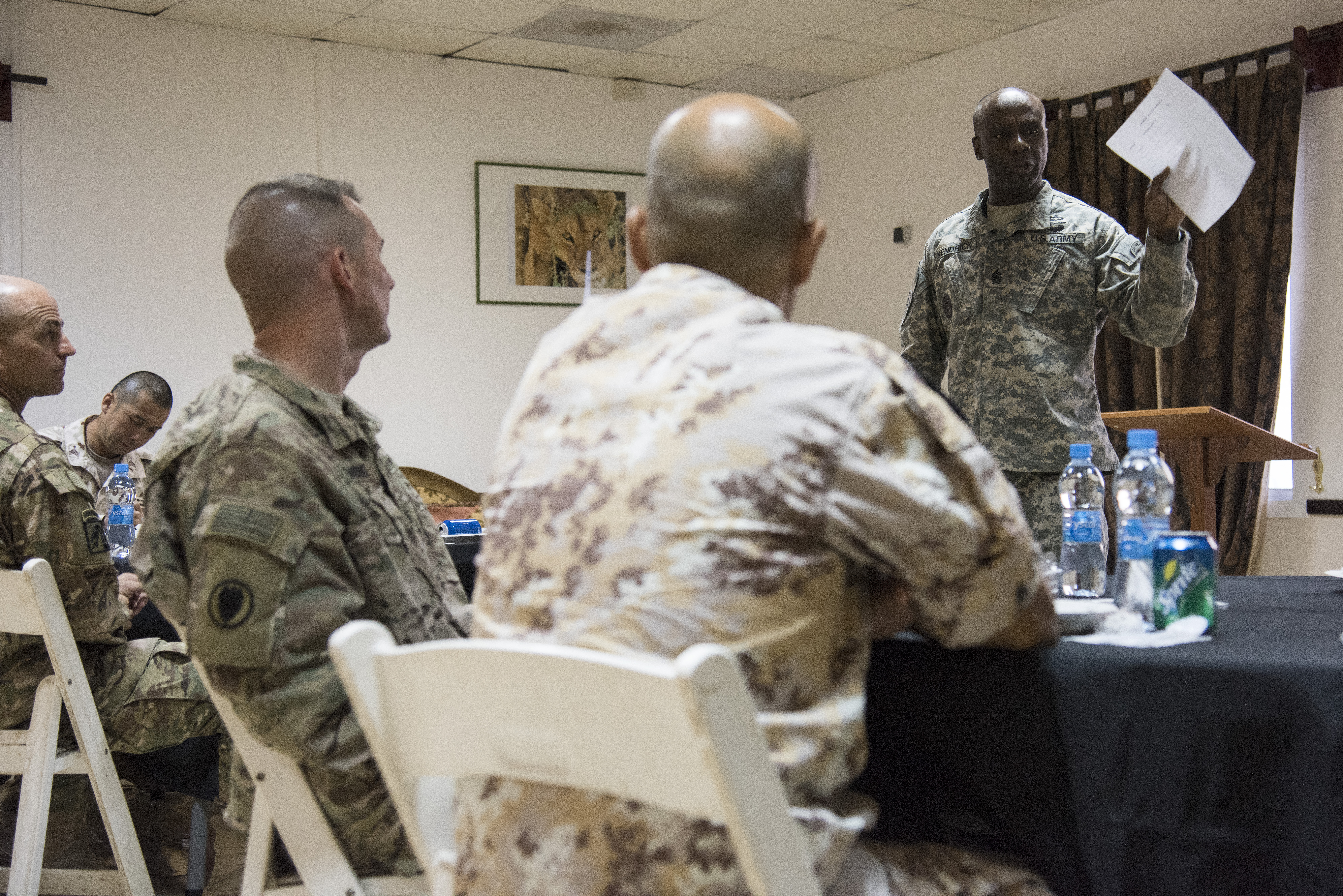 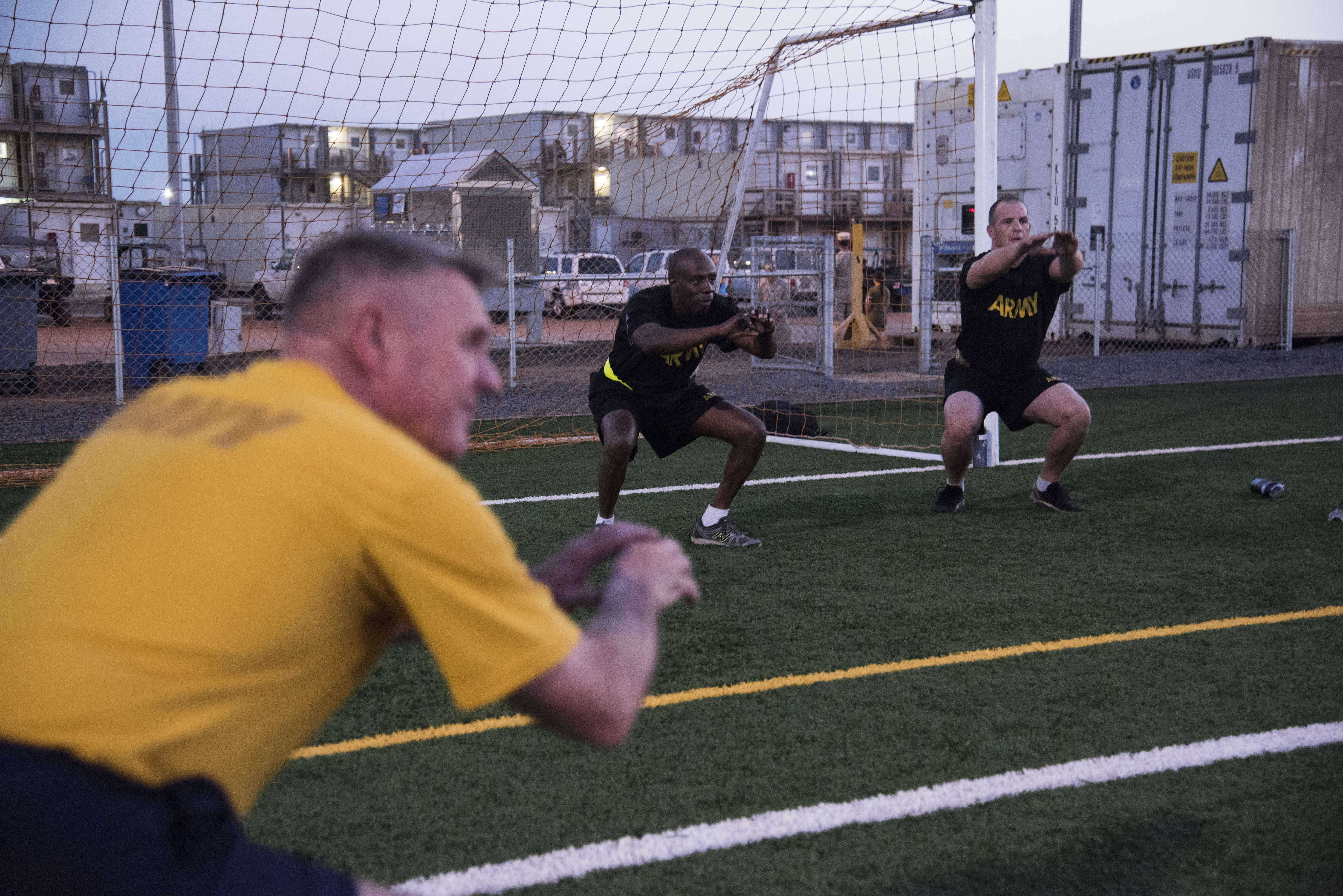 The JFSELPD is an all-services course aimed at mentoring and educating the highest-ranking senior enlisted leaders serving Combined Joint Task Force-Horn of Africa and Camp Lemonnier.

“I had great mentors who taught me that in order for senior enlisted leaders to stay proficient there must be someone to continue mentoring them,” said Command Sgt. Maj. Butler Kendrick, CJTF-HOA command senior enlisted leader (SEL) and the creator of the JFSELPD. “I believe that in our senior ranks there is not enough of that. We make the assumption that because you are senior leader you have all the answers. So programs like this give us a session to dialogue with our peers and to gain critical knowledge from each other.”

The course began with a group physical training (PT) session led by Kendrick, which he explained was a critical means for SELs to lead from the front, because PT is essential for all service members.

After PT and breakfast, the SELs began a series of briefings covering the political, military, economic, social, and infrastructure of the countries within East Africa.

The main focus of these briefings was the current situation in Somalia and the African Union mission there to topple Al-Shabaab and stabilize the country.

“Without a doubt, the situation in Africa is very sensitive, and the coalition partners can and should strive to achieve more stability in this continent,” said Italian Navy Command Master Chief Francesco Siracusa. “Much of the information I acquired during the event will be reported to our younger soldiers in order to improve their knowledge on this subject.”

For Japanese Ground Self Defense Force (JSDF) Command Sgt. Maj. Ryuichi Ueda, the level of knowledge presented to the participants was enlightening and served to help JSDF SELs better understand the dynamic environment and ongoing mission of coalition partners in East Africa.

“What really stood out is that there are many differences between the JSDF, the U.S. military and coalition partners; the scale of operations was almost overwhelming,” Ueda said. “We came to Djibouti with a mission, a Japanese mission, and what was so great about these briefings was being able to see the bigger picture, the other partners, the other countries, and their roles here.”

Following the briefings, the group visited the embassy to meet with key leaders there.

“During the embassy trip we got to meet with several of the department heads such as the economic, political, and security lead,” said U.S. Air Force Chief Master Sgt. Marcus Hall. “They explained what their functions are and how they are setup, how they interact with the local government and how they interact with partner nations. We also learned about their responsibilities to the secretary of state and president.”

Besides the briefings and embassy trip, a key component of the development course was the opportunity for the U.S. and coalition partners to interact and learn from each other, explained Siracusa.

“It was very useful and instructive to start this type of event because it will strengthen the cohesive spirit and brotherhood between coalition partners,” Siracusa said. “It is important to dedicate time to improve the professional knowledge and skills of the SELs to the advancement and betterment of the armed forces and coalition partners. The NCOs represent the true and very important organization inside the armed forces.”

Thanks to the course’s success, plans are already in the works to make the JFSELPD a monthly event with the responsibility of hosting it switching between partner nations.

“In November the JSDF plans to host the coalition partners for a JFSELPD,” Ueda said. “We will focus on JSDF history and heritage. This is the first deployed JSDF operation and discussions would focus on the JSDF mission in Djibouti.”

The day concluded with dinner and a certificate presentation by Kendrick for the attendees, as well as a final piece of advice, “leaders are always learning.”