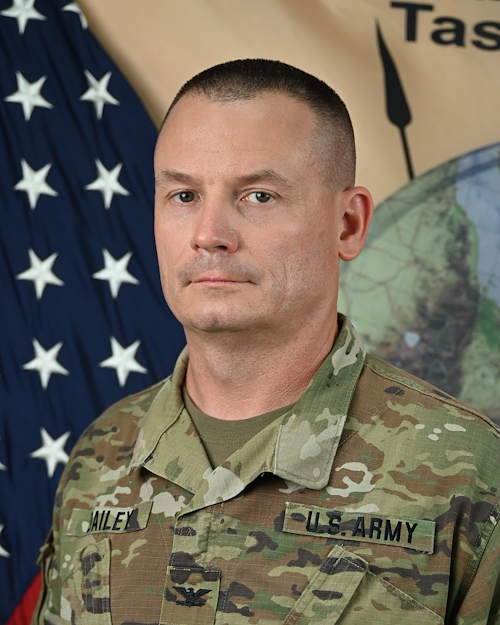 Colonel David A. Dailey serves as Chief of Staff, Combined Joint Task Force-Horn of Africa. A native of Sturgis S.D., he received his commission as an engineer officer from the South Dakota School of Mines and Technology’s Reserve Officer Training Program in 1993. He is a graduate of the engineer officer basic and advanced courses, Command and General Staff College, and the United States Army War College.

Colonel Dailey has held several positions over his career including commander of the 200th Engineer Company in Pierre S.D., the 153rd Engineer Battalion in Huron, S.D., and the 196th Maneuver Enhancement Brigade in Sioux Falls S.D.

In his civilian capacity, he is the assistant vice president and division manager for the heavy highway division and is a registered professional civil engineer for Heavy Constructors, Inc. in Rapid City, S.D. He is responsible for the construction of concrete pavements, water, sewer and storm sewer lines, earthwork, mass concrete structures and bridges.

He also oversees a staff of 75 to 150 personnel depending on time of year and construction workload as well as supervising all estimating, engineering, purchasing, contracting, equipment utilization and purchasing, personnel hiring and staffing for the division.